by on-Sicily | places of interest, tips

Mid April we visited the nature reserve Lo Zingaro (Riserva Naturale Orientata Zingaro), near the quaint town of Scopello and the famous tonnara. Before we continue, here are a few tips for those who’d also like to visit the nature reserve:
R

Put on sturdy shoes, such as mountain shoes or solid sport shoes. Don’t go for a walk in the park with flip flops or shoes with thin soles (you will immediately regret that decision when you reach the first rocky paths …).
R

You cannot buy food or drinks in the nature reserve, so you will have to take some with you. Make sure you’ll have enough water, because it can be quite hot. Pani cunzatu is a typical regional Sicilian dish and ideal to take with you when you go hiking in Lo Zingaro. It is a kind of focaccia bread, with tomato, cheese, olives and anchovies, that you can eat both hot and cold. You can find delicious pani cunzatu at the Mulè bakery in Balestrate or at the bakery in Scopello.
R

You’ll find little shelter from the sun in the nature reserve. We therefore recommend visiting the park in the early morning on very hot days. And stating the obvious: sunny days are the best days to visit Lo Zingaro (isn’t everything better when the sun shines?)
R

You can follow various walking routes in Lo Zingaro. If you’d like to get a good impression of the park and don’t want a challenging hike, we recommend following the coastal route to the third bay (which will take you about an hour to an hour and 15 minutes ). After a pick-nick and/or a swim you can them follow the same road back to the entrance. If you prefer demanding walks, keep in mind that the indicated walking time of the most challenging routes (the routes that will take you into the mountains) is quite optimistic …
R

The nature reserve has the most beautiful bays with pebble beaches. You can easily combine a walk in Lo Zingaro with a refreshing dip in the clear water. The first beach is only a 15-minute walk from the south entrance (near the town of Scopello).
R

Taking a pram to Lo Zingaro?

We advise against going into the nature reserve with a pram, even if your pram has off-road tires. The many stones and rocks are too large a barrier and would make a pleasant walk virtually impossible.
Back to our visit of Lo Zingaro! It was wonderfully sunny and there was a nice sea breeze, so an ideal day for a nice walk in the first official nature reserve of Sicily.
Search & book an accommodation in Sicily
We immediately found a parking space near the entrance of the park and bought two tickets (5 euros per person). The friendly park employee gave us a map with the various walking routes. We decided to follow the coastal road. This is the easiest walking route because you don’t have to climb much compared to the other routes.

Near the entrance of the park you’ll see a tunnel in a large rockery.

Before entering the tunnel we came across a welcome sign saying: Welcome to the Zingaro, the first nature reserve of Sicily.

On a large wall there’s a wood carving saying “La marcia dello Zingaro 18 maggio 1980”. This memorial commemorates the march of more than 2000 Sicilians who had gone to Lo Zingaro on May 18, 1980 to protest against the construction of a road from Scopello to San Vito lo Capo. Thanks to the national and international media, the manifesto of the march had a major impact and created a new legislative phase in Sicily. Less than a year later, on May 6, 1981, the Zingaro became the first official nature reserve and thus a protected area by regional law.

From the tunnel we already caught a glimpse of the beauty that lay ahead.

Immediately after the tunnel there is a picnic area overlooking the sea (Golfo di Castellammare).

Soon the easily accessible path turned into a narrower rock path with lots of loose rocks and stones.

We enjoyed the color contrast between the mini palms and flowers in the park and the bright blue sea in the background.

We decided to go directly to the first bay and skip the museum this time. The first bay is called Cala Capreria and the path to it has clear signage. 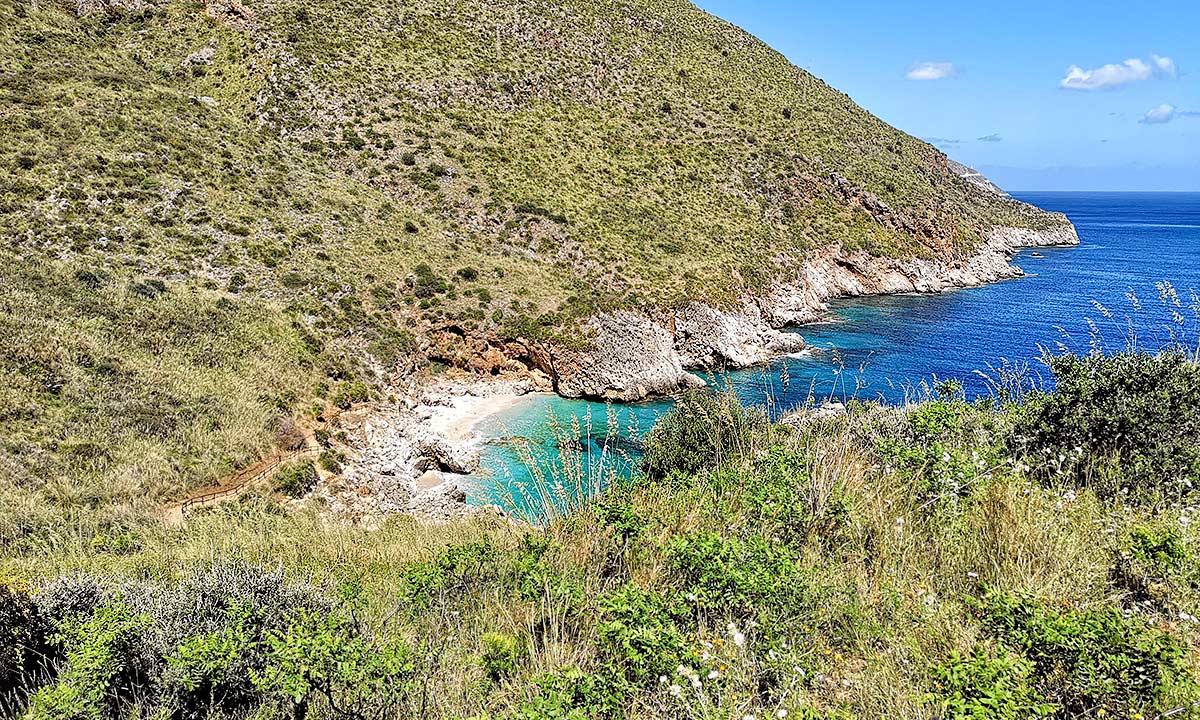 After every turn in the path, we got a better view of the bay and soon we saw the aquamarine-colored water and the rocky coast.

Near the stairs to the beach we stopped to enjoy the view (we could even see the Monte Palmeto in the distance) and the almost tropical looking bay. 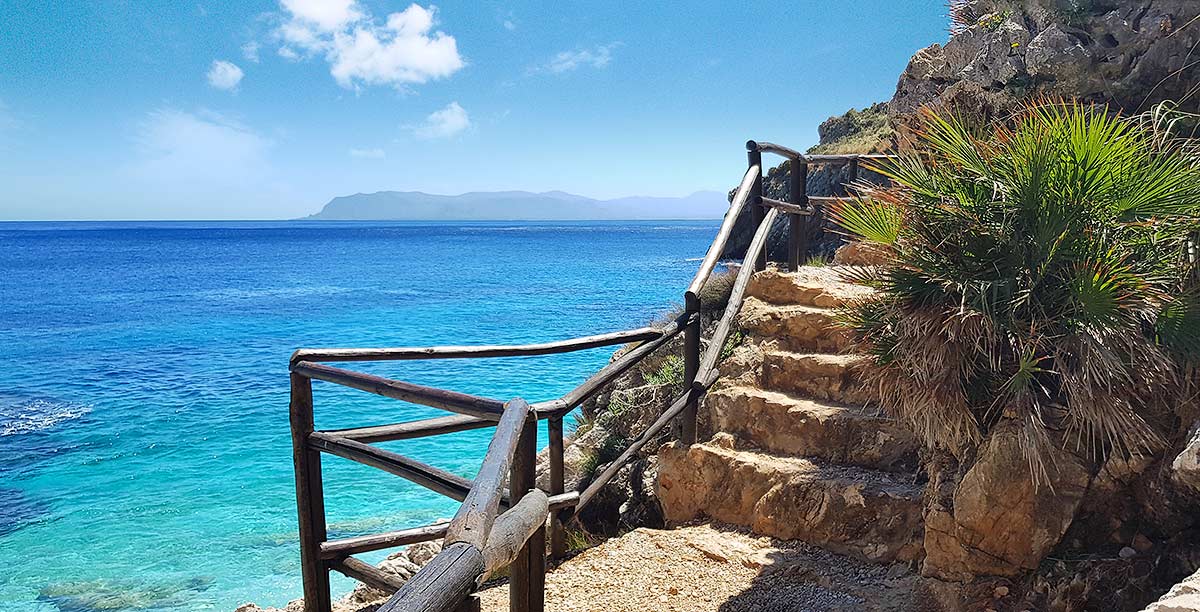 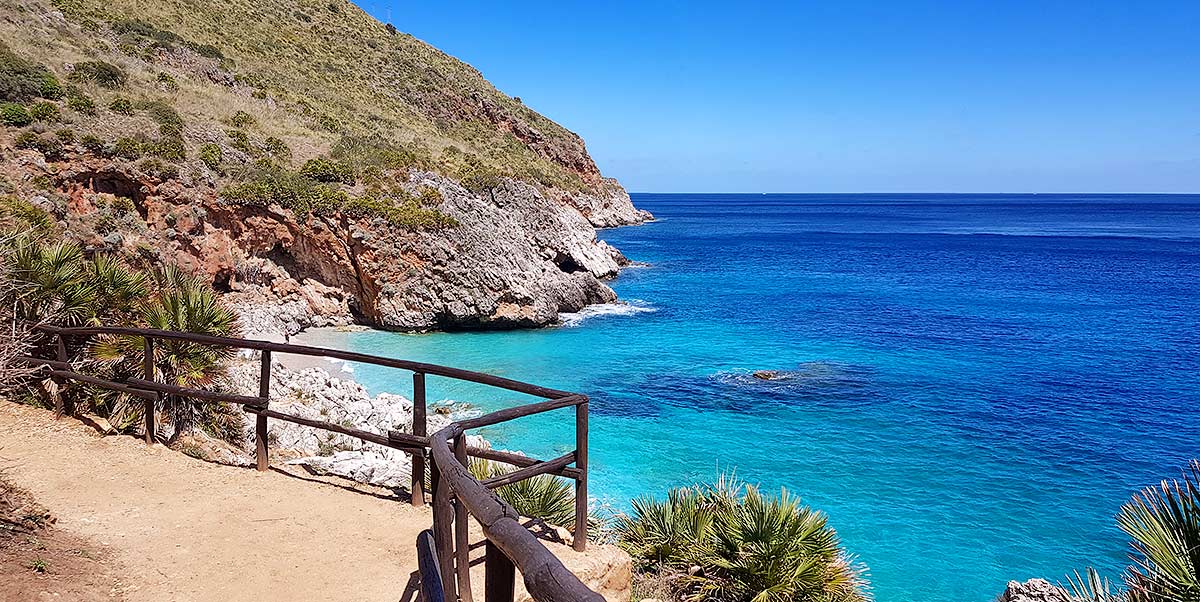 We probably took 100 pictures in this beautiful bay. It was really hard choosing only a few of them for this blog post… 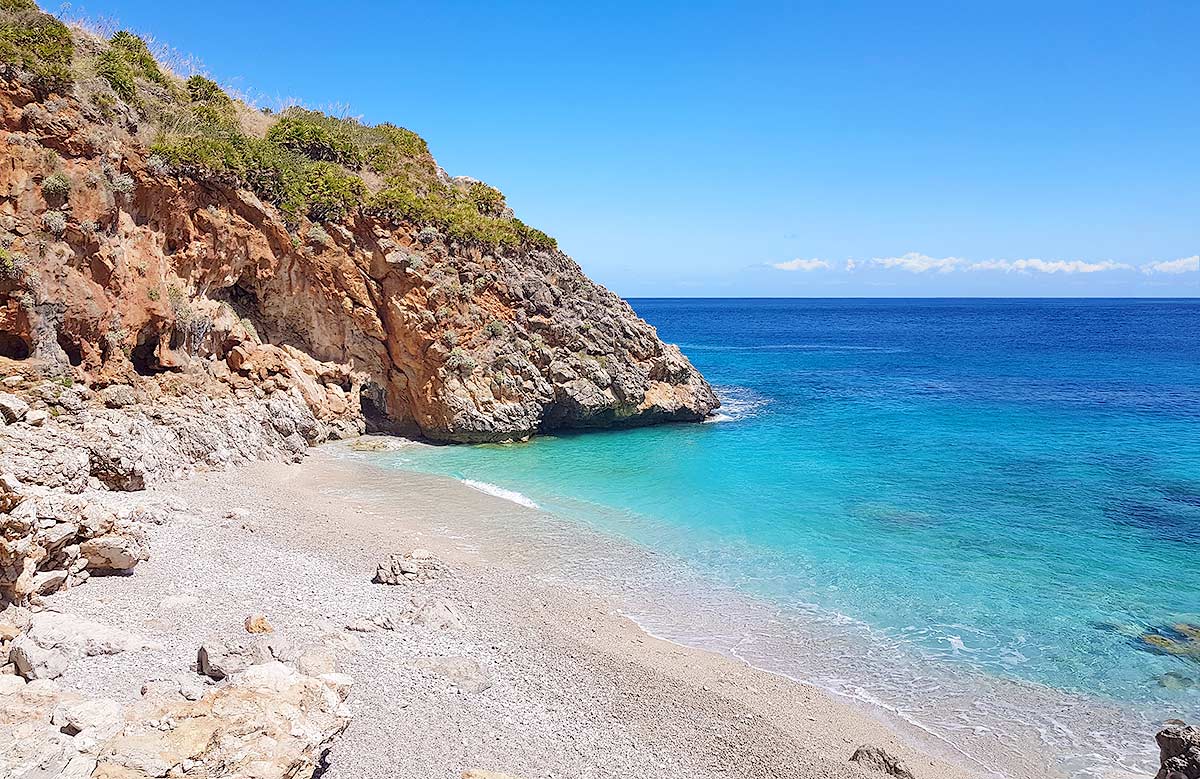 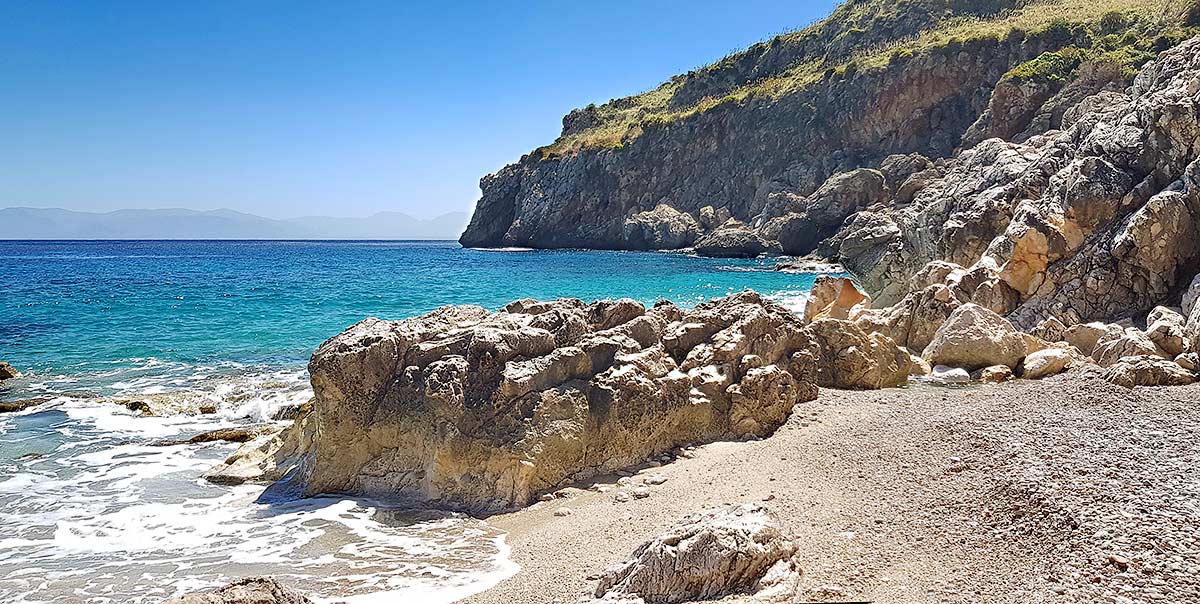 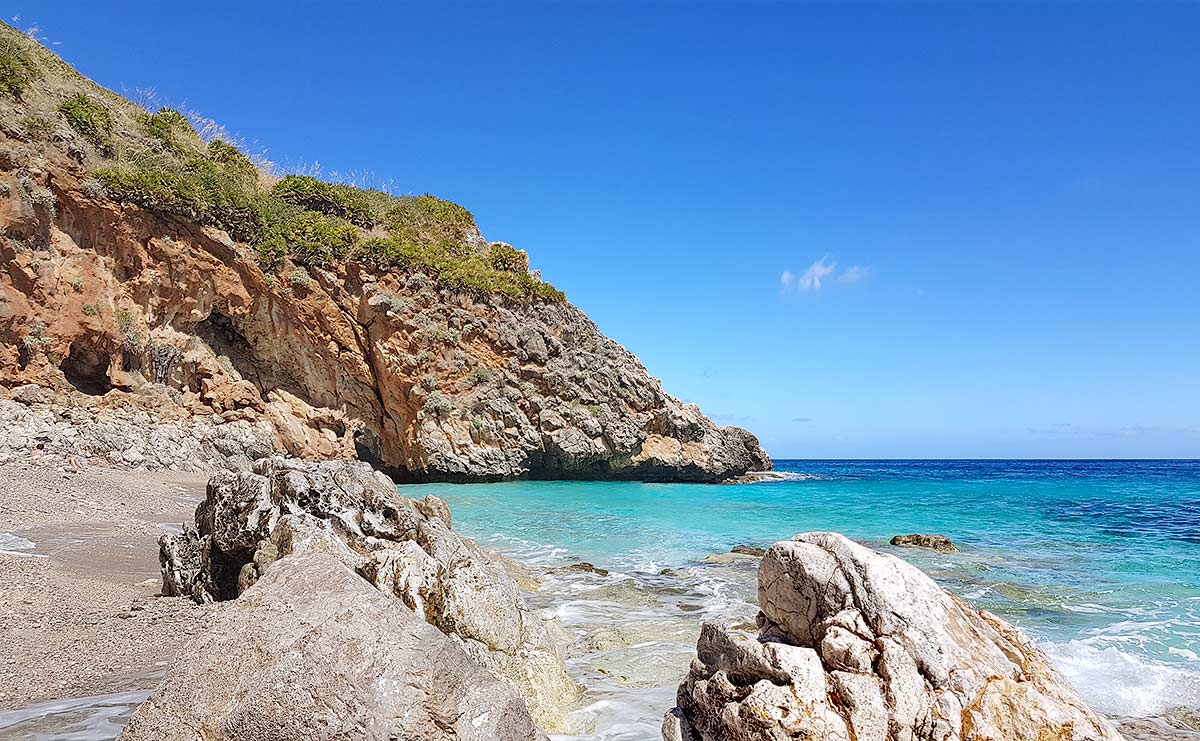 After our visit to the Cala Capreria we decided to visit the next two bays. You can see the photos of those bays in part 2. 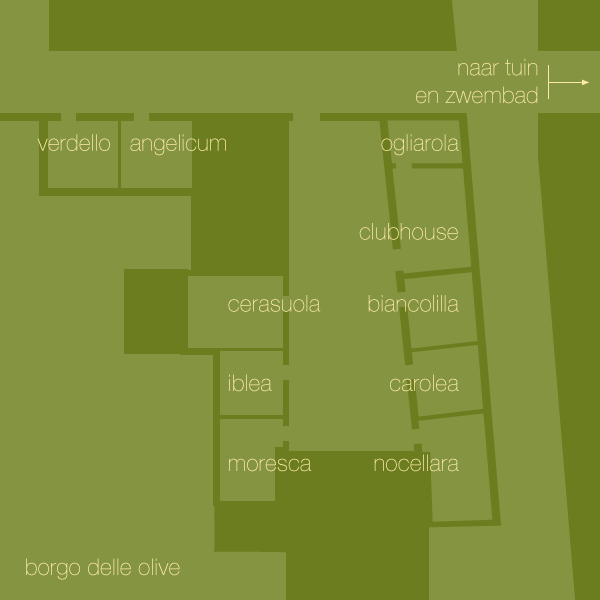