Visiting the medieval town of Erice

by on-Sicily | places of interest

The medieval town of Erice is located on top of the Monte Erice (called Monte San Giuliano until 1934) at about 750 meters above sea level. This town has beautiful city walls, churches, castles, cobblestone streets and characteristic buildings and from several points in Erice you’ll have a breathtaking view. 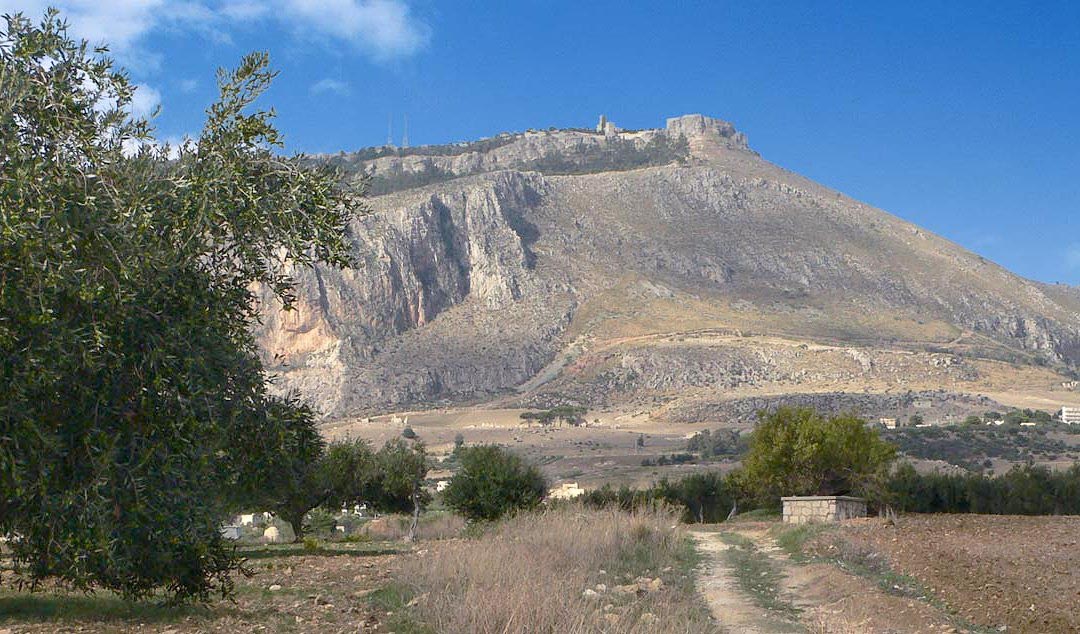 You can reach the town by car, by bicycle (steep climb!) or, as long as it is not too windy, by cable car (funivia). 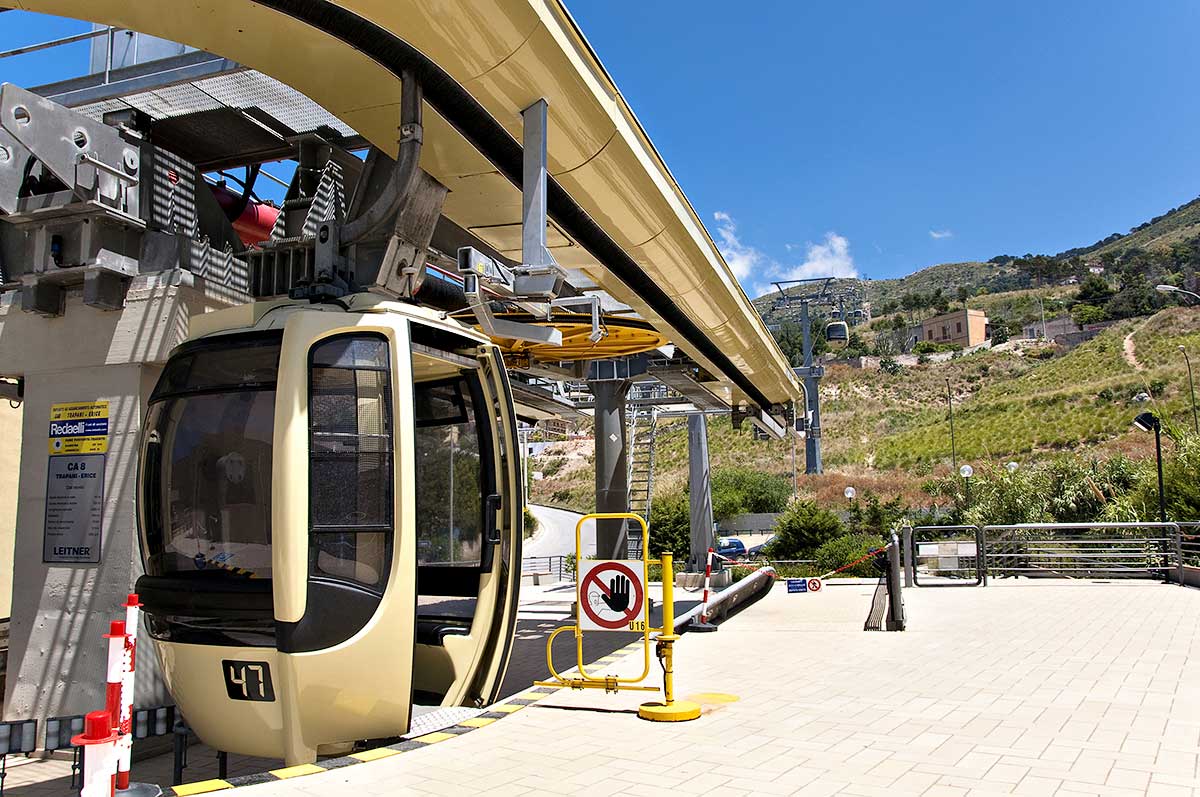 The cable car offers you beautiful views of Trapani and the Egadi islands, Favignana, Levanzo and Marettimo. 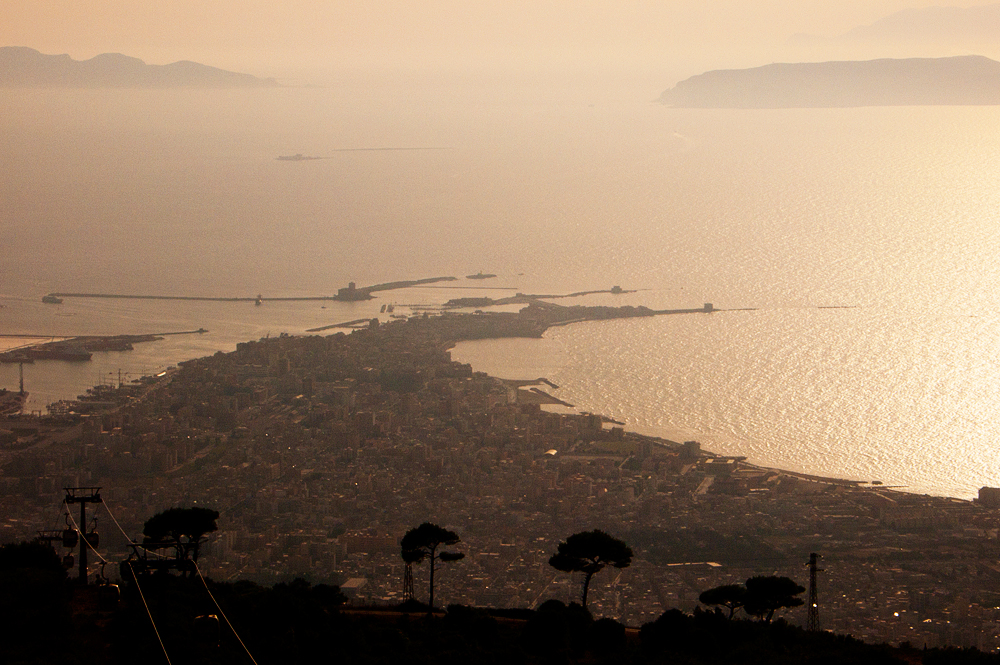 You enter the town through the city gate, the Porta Trapani. Turn left at the gate and you’ll arrive at the cathedral (Chiesa Matrice) and the bell tower, the Torre di Federico. 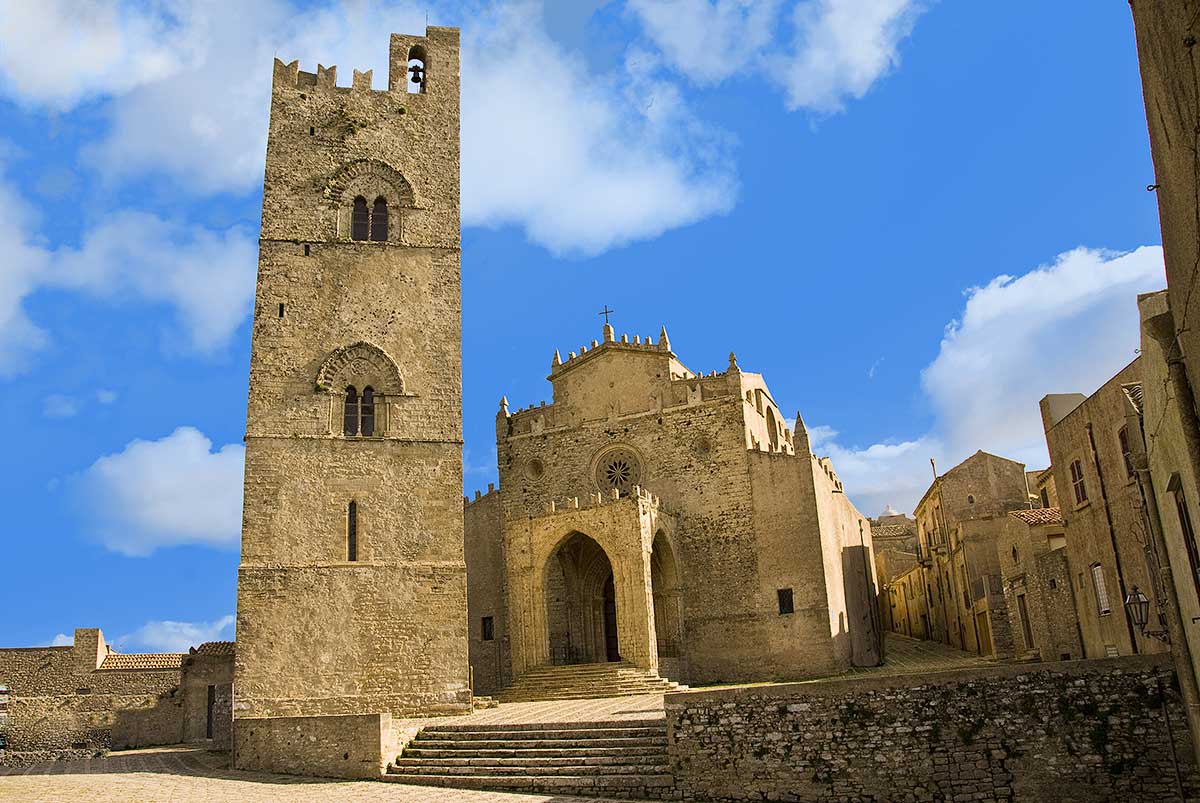 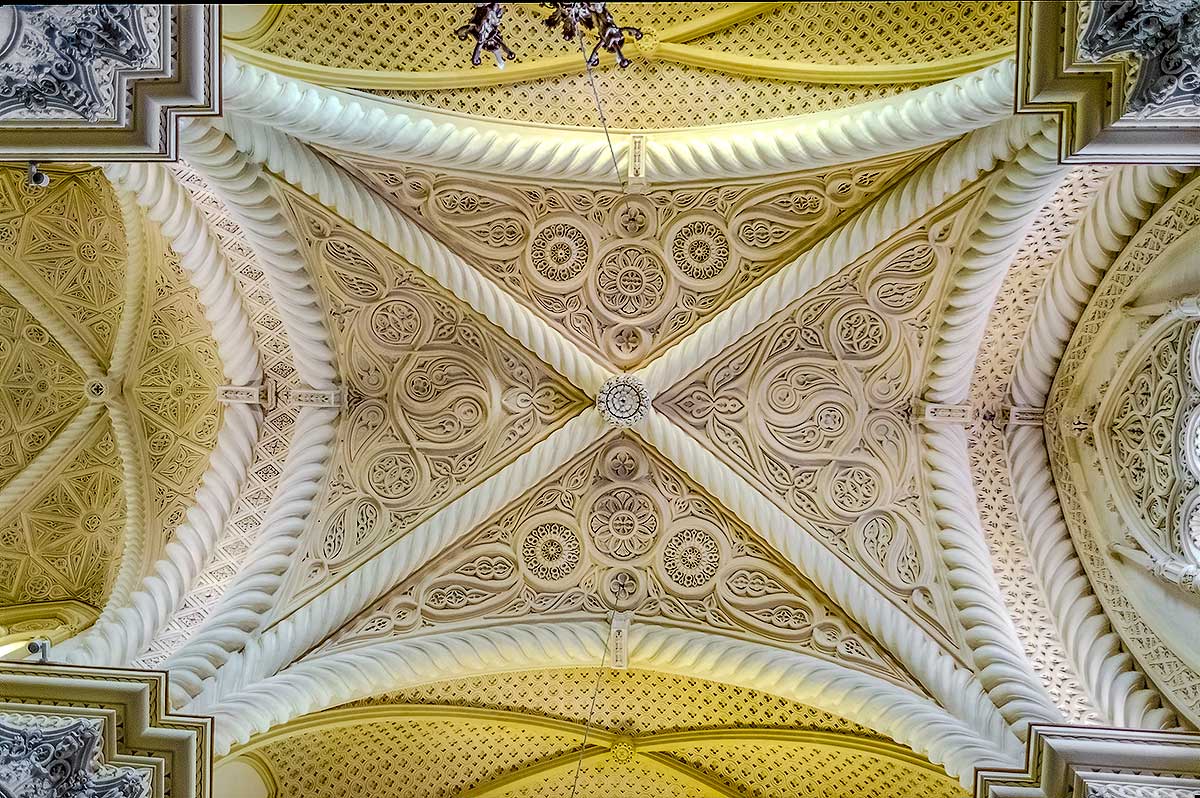 The bell tower was built in 1312 and used as a lookout tower. At the tourist information point located in the tower you can buy a kind of day pass (around 5 Euros p.p.), which will give you access to various sights in Erice. NB Not all sights are covered by the pass. Those that are, are shown on a map.

From the clock tower you’ll have a beautiful view of the town of Erice. 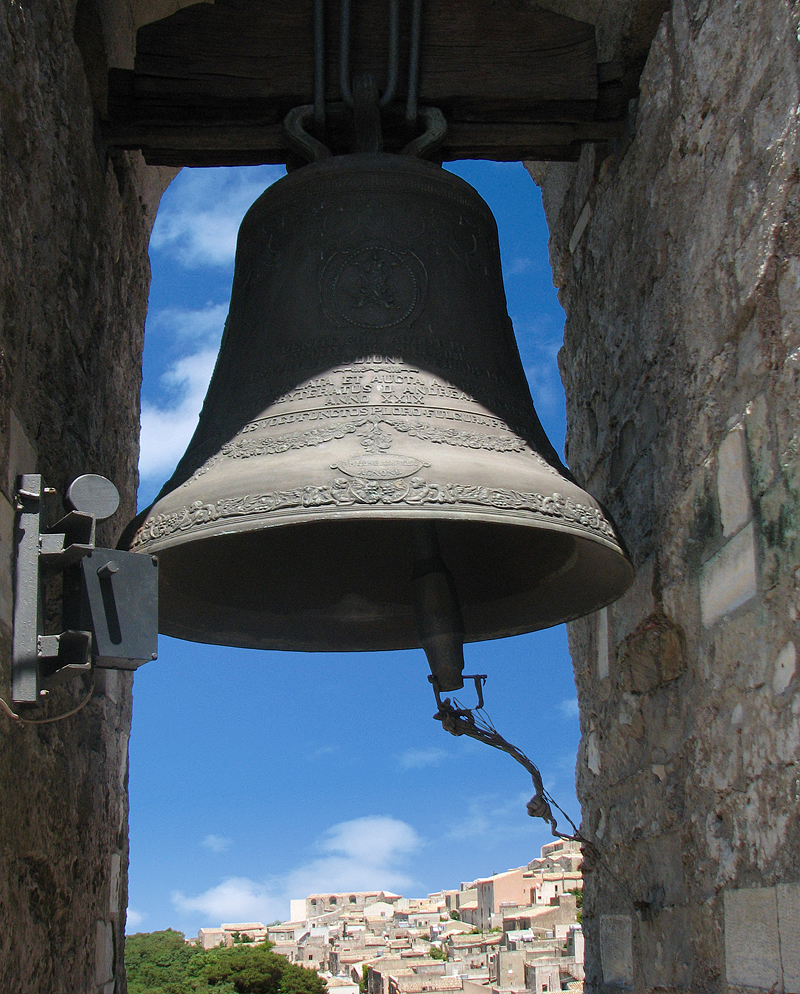 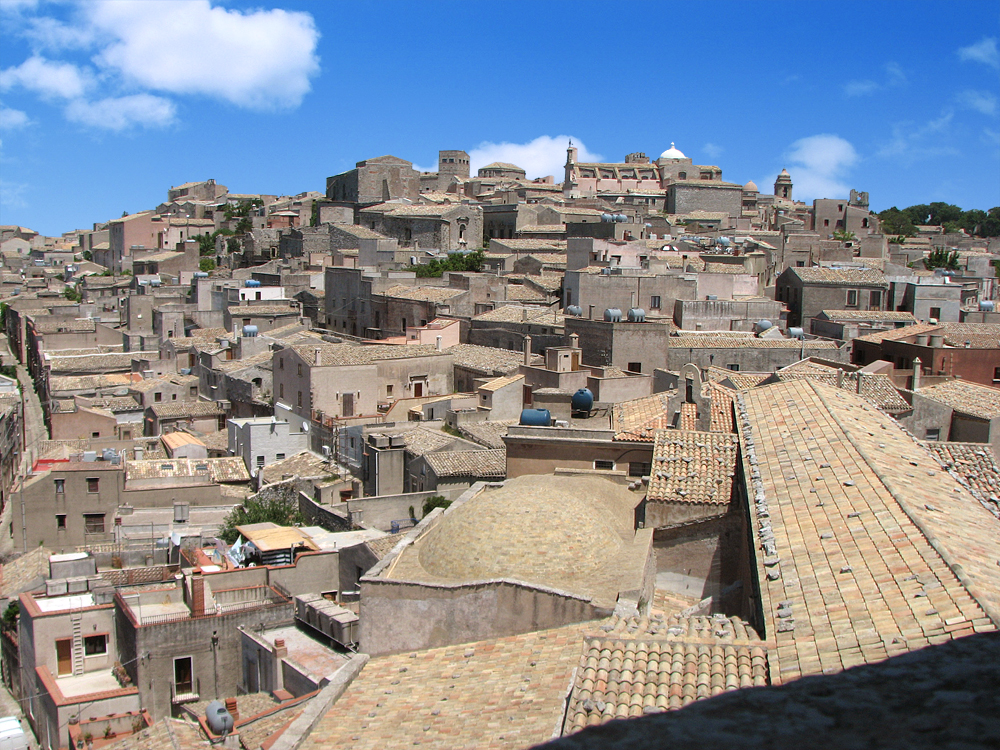 You will find many souvenir shops, restaurants and bars on Erice’s main street, the Corso Vittorio Emanuele. If you leave the main street, you will see many narrow, cobbled streets with natural stone buildings and nice vistas.

On clear days, the views of Monte Cofano, the area near San Vito lo Capo, Trapani, the salt pans and the Egadi islands are spectacular! 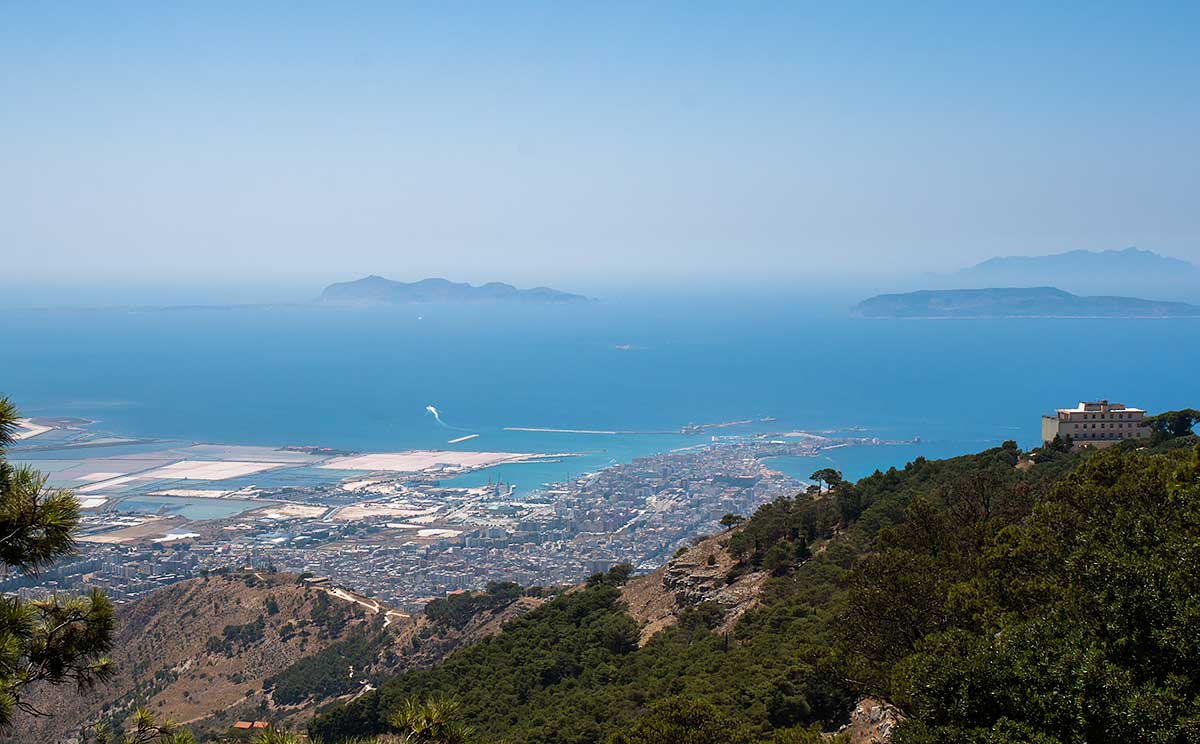 On the southeast side of Erice you will find a large Norman castle, the Castello di Venere, which, together with the Torri del balio, was part of the town’s defense line. The Torri del balio was restored in the 19th century by Count Agostino Pepoli. He also had the towers’ garden, the Giardino del balio, laid out and he constructed a small villa. This Torretta Pepoli is a symbol of Erice and has recently been restored.
Search & book an accommodation in Sicily 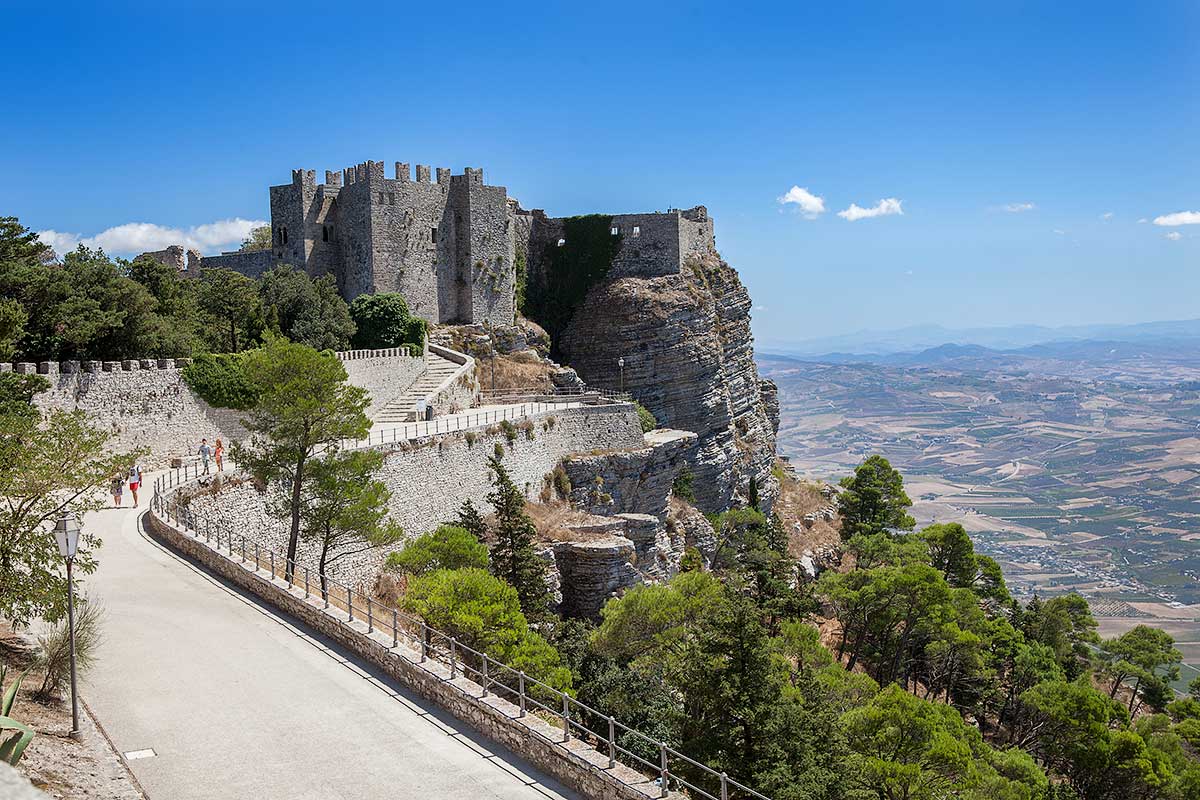 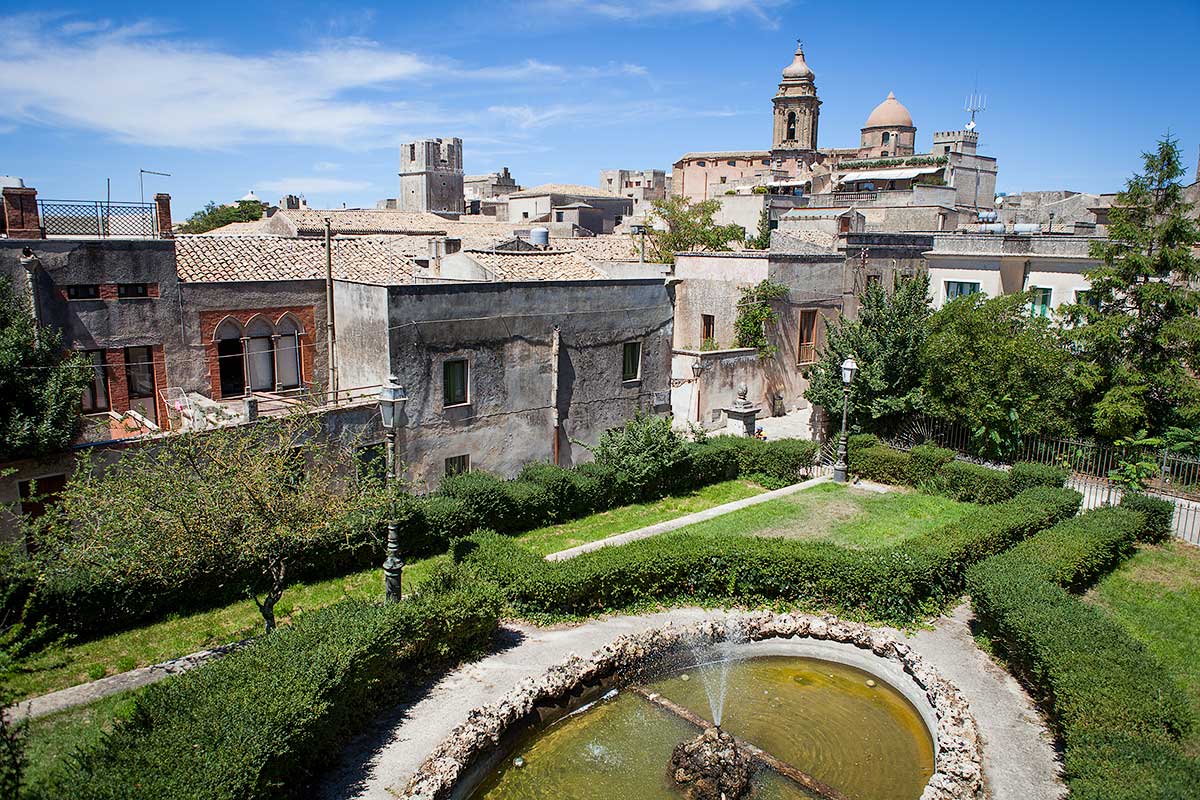 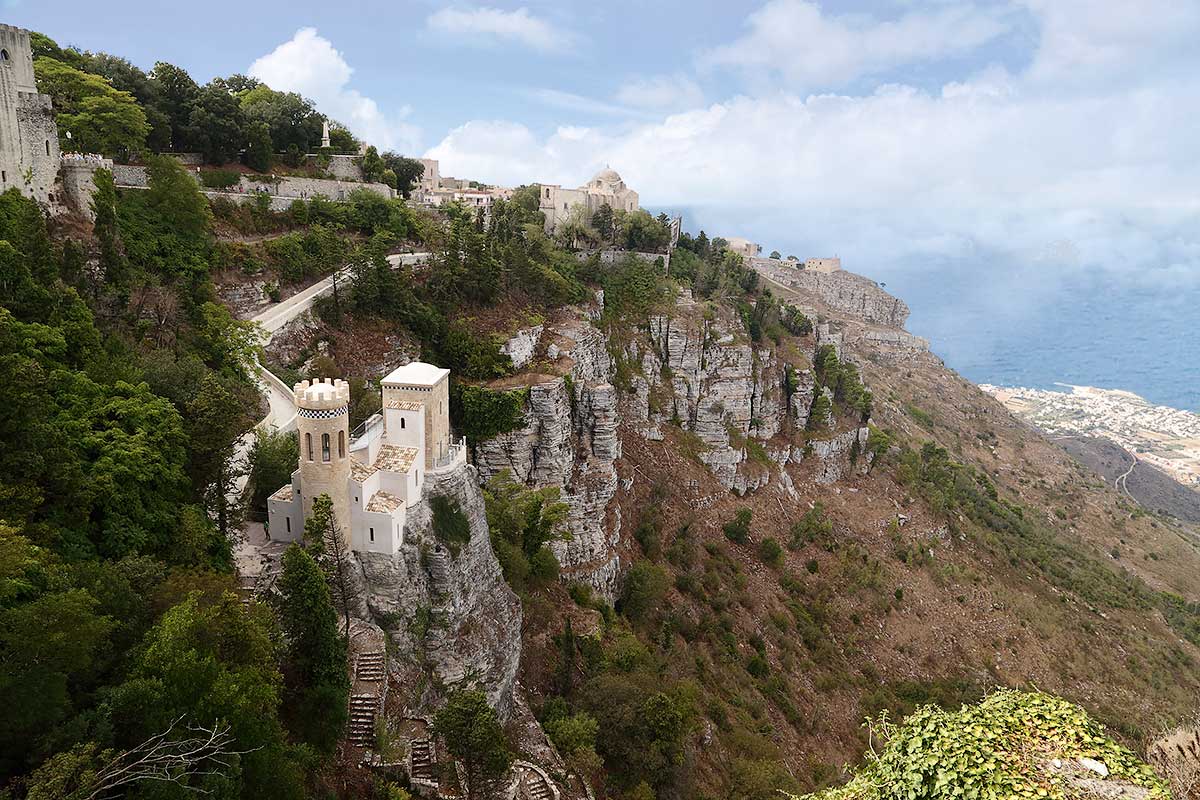 According to the Normans San Giuliano helped them conquer the Arabs. Therefore, San Giuliano, also called “the liberator”, became the patron saint of Erice. The San Giuliano church was built in 1070 in honor of this saint and was one of the first churches of Erice.

After a part collapsed, the church was restored and expanded in the 17th century. The beautiful baroque bell tower was added later, in 1770. 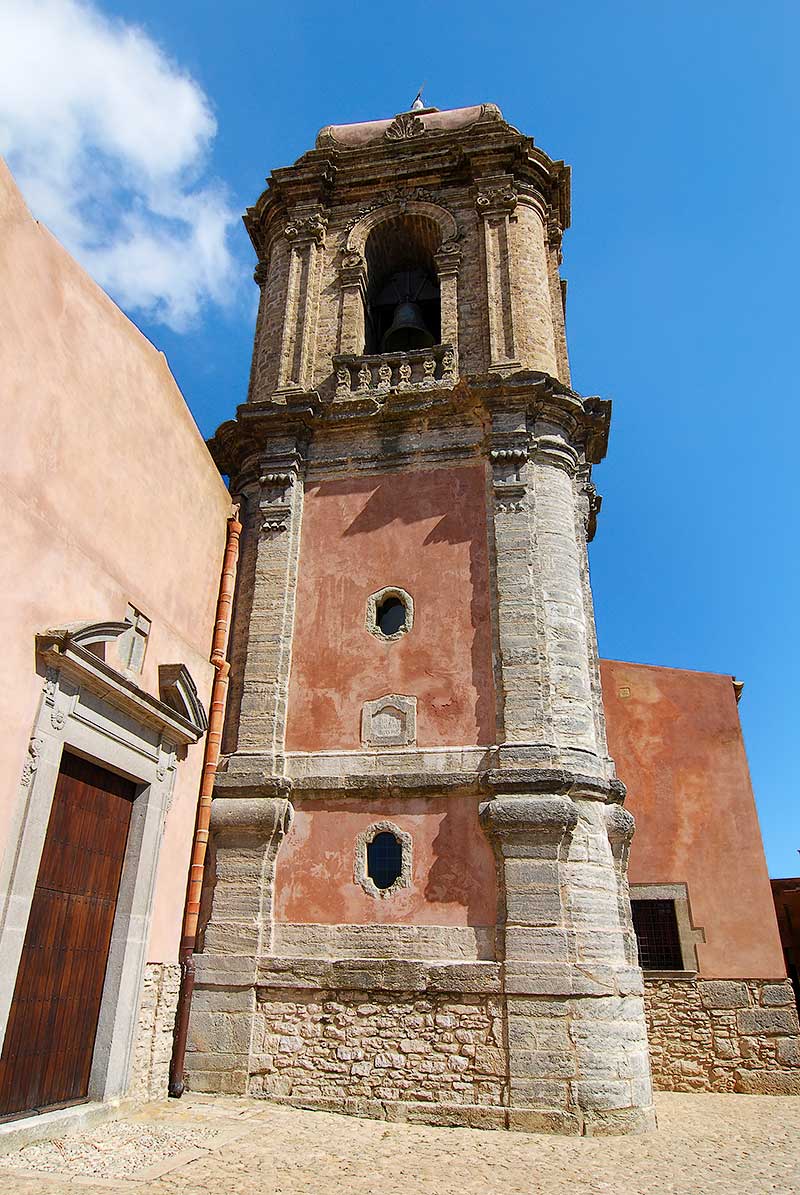 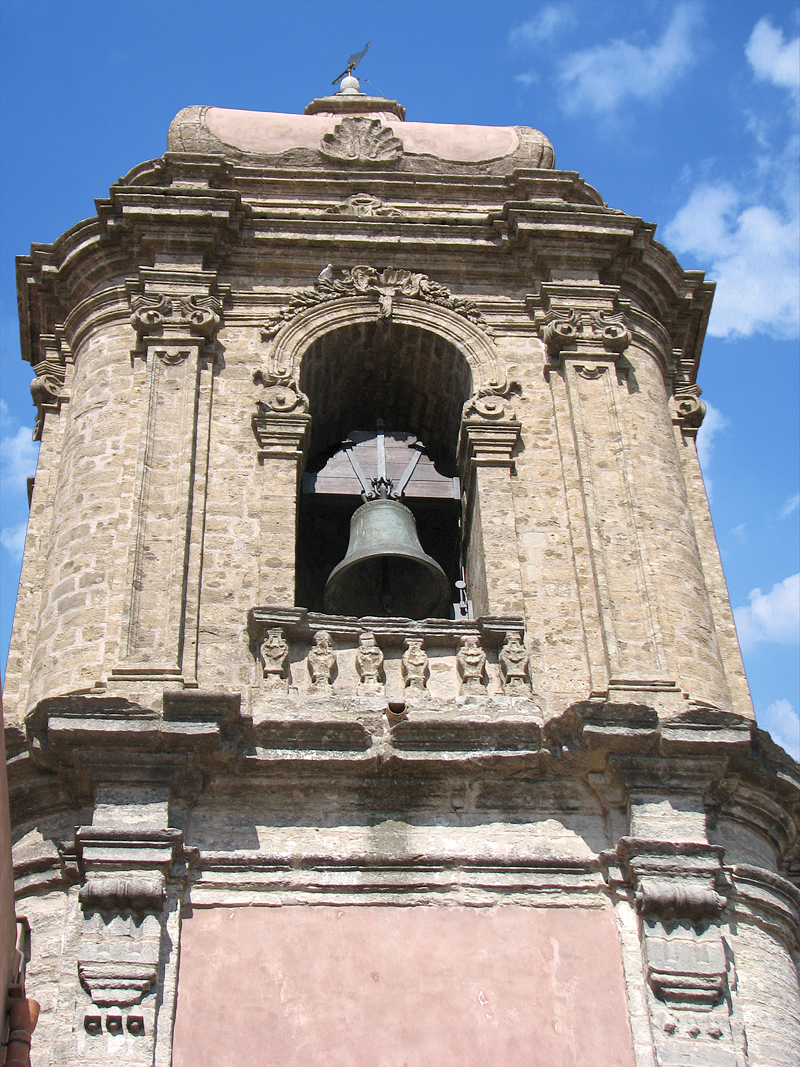 In the evening the various towers and castles are beautifully lit and you can see the lights of Trapani in the distance. 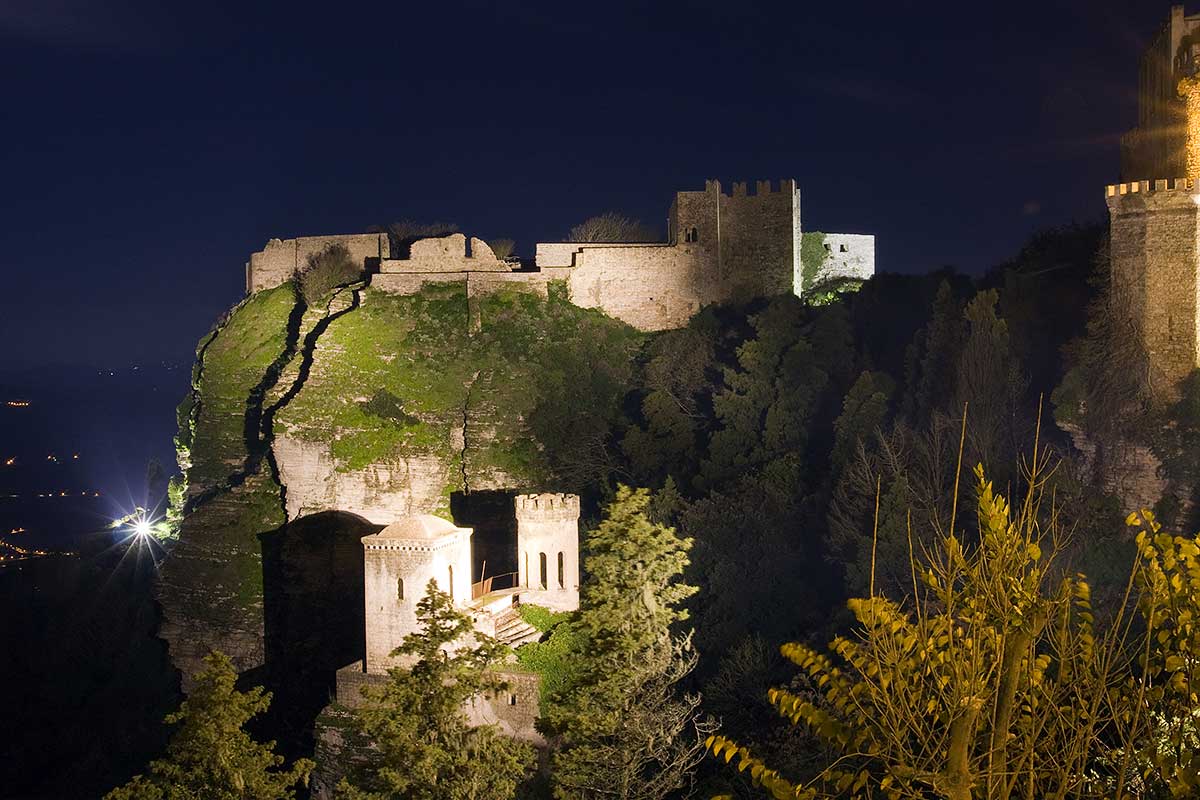 Erice is only a 45-minute drive from our apartments, villas and holiday homes and is one of the many places of interest in our area.